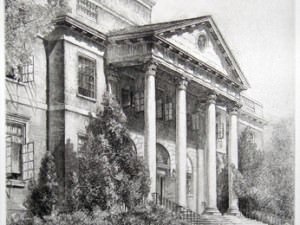 A premier American etcher, Louis Orr is celebrated for his large, detailed works of Paris, etchings he completed as the French Army’s Official Artist from the frontlines of World War I, and domestically, for his extensive series of etchings of North Carolina landmarks.

Orr was educated at the Hartford Art School, the Art Student’s League in New York, and the Academie Julian in Paris. Enamored by France, but a hometown boy at heart, the artist spent much of his life living between Hartford, Connecticut and Paris. During the 1920’s, Orr was one of the most sought after artists on both sides of the Atlantic. Notably, Louis Orr was the first living American artist to have his work collected by the Louvre, and his was also the first original etching ever purchased by the Museum.

In 1906, Louis Orr traveled to Paris for the first time. He spent 22 months in France, but returned to the Northeastern United States to continue his education, teach at the Art Society, and work at The Hartford Times. His lust for Paris brought him back in 1911, where he enrolled at the Academie Julian, and began working under Jean-Paul Laurens, a notable painter and major proponent of the French Academic style.

In 1917, Orr enlisted in the French Army, through which he was given special permissions to be on the frontlines of World Was I as a working artist.

He traveled to Rheims, where, at risk to his own life, he created etchings of the Rheims Cathedral under German artillery fire. This effort and the works it manifested were the launching pad for Louis Orr’s career, bringing him widespread international recognition. The French Government arranged an exhibition in Paris of these works, the sales from which were donated to the French Red Cross. Furthermore, Orr exhibited these works at the Luxembourg Gallery, and elsewhere. The Louvre now hosts 4 of the works he produced during World War I. Following the war, the artist returned stateside, but continued to travel frequently.

During another trip to Paris, Louis Orr met Robert Lee Humber, who later led the effort to establish the NC Museum of Art in 1947. Together, they conceptualized a series of 50 etchings of North Carolina landmarks.

When Orr returned stateside in 1939, he and Humber took an extended road trip around NC to formulate a list of possibilities for subjects; a list that originally contained over 100 places! As a North Carolina native and cultural leader, Humber was instrumental in the formulation of this project. It took Louis Orr nearly 12 years to complete the 50 plates they settled on, depicting historical places, landscapes, houses, and plantations from around the state. Interestingly, the artist preferred to work from his drawings of these sites, so although he took many trips to NC during this period, Orr remained Hartford based, working between Connecticut and New York City. Complete sets of 50 still exist today in some libraries and institutions.

Gallery C, having established an unparalleled reputation for its knowledge and expertise in the Louis Orr etchings of NC, is often called upon to assist museums and private collectors in the acquisition and deaccession of these etchings.

Today, his work can be found in libraries, public buildings throughout NC, The Metropolitan Museum of Art, the Boston Museum of Fine Arts, and the Smithsonian Institute, as well as in private collections on both sides of the Atlantic.

Louis Orr was born in Hartford, Connecticut in 1876 to Carolina Louise Naedele Orr and John Henry Orr. He came from a long line of printers and engravers; it had been his family’s business since the 18th century in Scotland and Ireland. His grandfather, J. W. Orr, was the Dean of American Wood Engravers and ran an extensive printing establishment in New York City. Despite his family’s established footing in this line of work, they discouraged Orr from pursuing the art in an effort to help him avoid the hardships of the artist lifestyle. Once, as a child, his father noticed him cutting out pictures in patent leather and pasting them on board to make woodcuts. In response, he calmly told Louis that he would “break [his] back if [he]ever became an artist.” Nevertheless, when Louis Orr came of age, he followed his intuition and enrolled at Hartford Art School (studying there from 1903-1905), where he began his formal arts education under the mentorship of the notable American painter Walter Griffin.

In 1904, the Art Society hosted an exhibition displaying the work of 55 students from their program. In the exhibition review by The Hartford Courant (the oldest continuously published newspaper in the United States), Louis Orr was the only student mentioned by name in praise of his work and skill.

“Louis Orr has the decorative poster in color, announcing the exhibition, very effectively throwing a distant view of Hartford beneath an ornamental arch with entablature. Mr. Orr was at Byrdcliffe last summer and shows a landscape, which took first prize there, and also some monotypes and pencil sketches. The monotypes are rapidly drawn sketches in color on copper, one or two impressions, only being taken while the color is fresh. Some of them are quite effective, showing some relation to etching.”

Orr’s early artistic endeavors focused primarily on drawing and painting with oils and watercolor. However, he did not feel personally successful in conveying his artistic abilities through these mediums, so he once again followed his intuition, turning to etching, a medium he had always been curious about. Louis Orr taught himself etching through instinct, a method that helped him quickly develop his own unique style. The artist’s first original etchings date from 1908. Louis Orr spent a large part of the rest of his career building a strong reputation in printmaking, with a specialization in architectural subjects, such as the bridges and cathedrals of Paris.

In 1906, upon receiving a $350 scholarship from a group of his mentors in connection with the Hartford Art School, and despite advice from said mentors to enroll at Lyme Academy College of Fine Art instead of traveling (where the money would surely last him longer), Orr moved to France. Following in the spiritual footsteps of his adventurous uncle and namesake, Louis Orr set off for Paris by boat without a word of French in his arsenal, but with a burning “lust for wandering.”

By 1910, Orr was back in the Northeastern United States finishing his studies, teaching at the Art Society, and working at The Hartford Times. Interestingly, among his students at the Art Society was Hartford kin, Milton Avery, the celebrated American modernist painter.

In 1911, Louis Orr returned to Paris, where he enrolled at the Academie Julian, and began working under Jean-Paul Laurens. During this period, he also met his future wife, Gabrielle Chaumette, whom he married in 1913.

In 1917, the artist enlisted in the French Army as an Official Artist, creating work on the frontlines of world War I. This worked launched his career to the next level, bringing him international recognition and widespread success. For his contributions, courage, and allegiance to France, Orr was made an Officer of the French Legion of Honor in 1919, and was later promoted to Cross of Officer in 1930.

Following the war, Orr returned to live stateside, where he completed commissions all across the East Coast. In 1930, the artist traveled to Spain, where he did a series of pastels of the Alhambra. He exhibited these pastels in Hartford galleries, and they sold off incredibly quickly. Soon after, while in Paris, Louis Orr met North Carolinian Robert Lee Humber. Together they conceptualized a series of 50 etchings of North Carolina landmarks, which Orr completed over the next 12 years, visiting NC occasionally, and mailing his proofs to Humber for approval.

Though Louis Orr spent many years of his life in Paris or traveling elsewhere, he always wanted to be remembered as a Hartford artist.

Louis Orr, was referred to as “the Rembrandt of his time.” He was universally recognized as one of the outstanding etchers of the 20th century. Born in Connecticut and retaining his American citizenship, Orr lived much of his adult life in Paris where he enjoyed many honors and awards, including the unique distinction of being the first American artist to be collected by the Louvre.

Orr occasionally returned to American to execute commissioned work for government and institutions. In 1938 the Duke Memorial commissioned Orr to do a series of six etchings called the “Duke University Centennial Etchings.” Inspired by Duke’s beauty and majesty, Orr stated that the etchings were outstanding examples of his work. The Duke University Alumni Association sold the etchings and the monies were used towards the endowment of scholarships.

Only 150 sets were made, and they were sold individually and as matching sets. A few matching sets were embellished with Remarque drawings. The delicate pencil drawings in the margins were breathtaking in their elegant stature.

Seventy five years have passed, and over the years many of these pieces are lost to history. Today, Gallery C is pleased to offer a rare set of the Centennial Etchings, complete with Remarque drawings on each one. 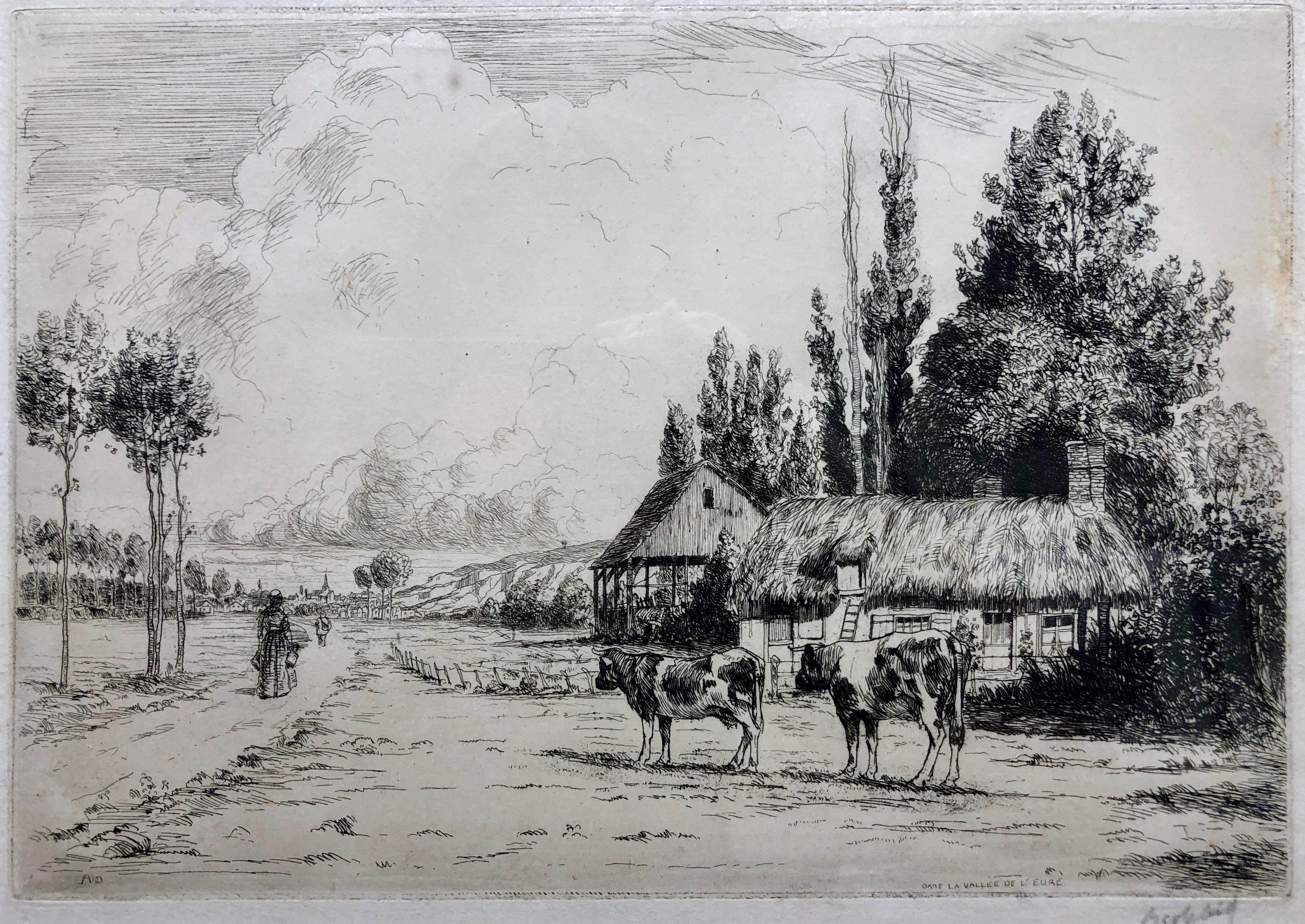