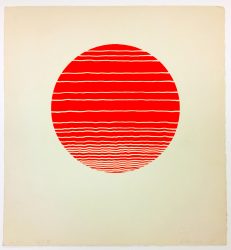 Henry Pearson was born in Kinston, North Carolina in 1914. He studied art at the University of North Carolina where he received his B.A. and later at Yale University where he received an M.F.A. Pearson spent over eleven years in the army during and after WWII. On one tour of duty in Japan he was assigned to interpret topographical maps due to his past training in Theatrical Set Design. He returned to Japan on another tour after the war in order to immerse himself more fully in the culture.

Pearson returned to the United States in 1953 and enrolled at the Art Students League in New York where he studied with Reginald Marsh. The Op-Art Movement was beginning to gain popularity and Pearson’s interest in topography and the landscape lead him to experiment with optical effects and his own fine line drawings. His artwork was included in the Museum of Modern Art exhibition “The Responsive Eye.”(1965). He later received a retrospective exhibition at the North Carolina Museum of Art in 1969. Works by the artist can be found in the permanent collections of both the Museum of Modern Art and the Metropolitan Museum of Art.