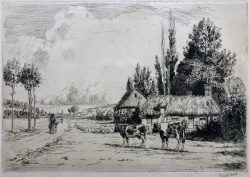 George Aid was born and raised in Quincy, Illinois and received his primary art education at the St. Louis School of Fine Art. Aid worked as a staff artist for the St. Louis newspapers before moving to France in 1899. There he studied at the Academie Julian in Paris with renowned painters Benjamin Jean-Joseph Constant and Jean-Paul Laurens. George Aid remained in France for 15 years becoming a very successful artist with a strong reputation. In 1902, he was one out of 25 artists featured in a special issue of The Studio, and in 1904, won a silver medal in the St. Louis fair and an honorable mention in the Salon des Artistes Francais. WWI had a profound effect on George Aid’s career in France. The distractions and difficulties of making and selling art during a war lead to some hardship and, eventually the decision to relocate back in the United States.

In 1920, Aid and his wife, Mary Orr, bought a vineyard in Tryon, North Carolina. It was in North Carolina that Aid was able to concentrate on his fine art again. Aid built a reputation as a portrait artist during the 1920s, and visited Charlotte in the 1930s painting many prominent people. He was commissioned to paint “The Baptism of Virginia Dare”, which was later donated to the Mint Museum. Aid’s health began to decline in 1935, and the “Virginia Dare” piece was his last painting. However, before his death in 1938, he finished commissions of Davidson College and North Carolina State College. George Aid has paintings in many museum and private collections throughout the United States including The Mint Museum of Art in Charlotte, Tryon’s History Museum and Lanier Library.