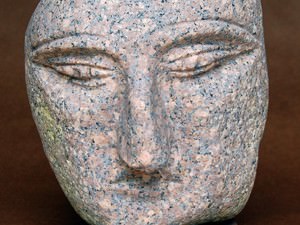 Ted Ludwiczak was born in Poland in 1927. He moved to New York in 1956 and worked as a contact lense grinder. In the late 1980’s when Ludwiczak retired and his wife died, he moved to a small cottage perched on a cliff on the Hudson River. He hauled the rocks out of the river and taught himself how to carve them. At first Ludwiczak used a chisel and an old lawn mower blade. Later he graduated to power tools. He has created a beautiful environment with hundreds of his large extended family of rock heads.

“Rocks talk to me,” he said. “I pick ones that have a face in them. Then I follow the shape of the stone. I can’t wait to see how it will turn out. I usually know about halfway through. It’s not always easy. Sometimes I lie awake at night, trying to figure out how to get the expression to come out of the stone.”

Ludwiczak’s stone carvings range in size from 6 inches to 4 feet. Working with these massive stones is a challenge for anyone, but this octogenarian is astonishingly strong and able.