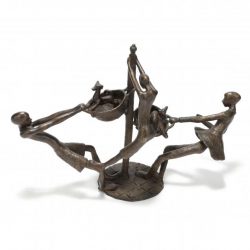 Ratilal Kansodaria  is hailed as one of the prominent contemporary Indian sculptors who is devoted to the medium of lost wax bronze casting.

Born in 1961, Ratilal Kansodaria has a Masters degree in Sculpture from MS University, Baroda and is currently Principal of Sheth CN College of Fine Arts in Ahmedabad.  His mother Diwali Baa, who lived a full life till the age of 102, was a vaidya (Ayurveda practitioner), a composer, singer, and fabulous at embroidery – a master of stitches.

Ratilal Kansodaria has been displayed in numerous group and solo shows in the country and abroad including in the 9th International Contemporary Art Sculpture Triennial at Osaka, Japan and All India Fine Arts Exhibition in Germany, organized by GTZ.

Ratilal Kansodaria work’s often portray children and animals playing interesting games together,  highlighting the Indian philosophy of ‘Lila.” Lila is a creative principle of play, which apparently has no rules, but instead a pattern of life force. In his fantastical works, children and animals leap and fly into the air and amuse the viewer.