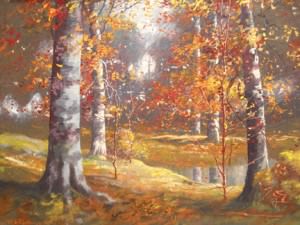 William Eyden Jr. was born in Richmond, Indiana in 1893, the son of an immigrant artist from Hanover, Germany. Eyden moved to New York City where he studied at the Art Students League under such noteworthy painters as John Bundy, Charles Hawthorne, Daniel Garber and William Merritt Chase.

While in New York, William Eyden Jr. painted many urban street scenes but his greatest love was painting in nature. Eyden is reknown for woodland scenes he painted in Indiana, his home state, and in the mountains around Asheville, North Carolina where he lived during the 1930’s. Eyden was a member of the Asheville Art Association, as well as the Hoosier Salon, the Bundy Club, and the Richmond Art Association. Works by William Eyden Jr. can be found in the permanent collections of the Richmond Art Association; Ball State Technical College; and Indiana University. 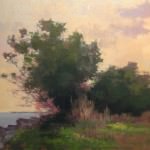