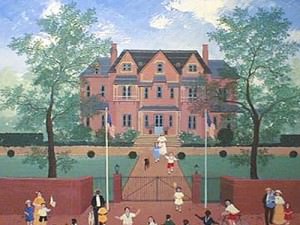 Internationally acclaimed artist Fabienne Delacroix is a resident of both Paris and New York and was official artist of North Carolina’s largest ever sporting event, the 1999 Special Olympics World Games. Like her world-renowned father, Michel Delacroix, Fabienne paints in a naive style that hearkens back to romantic times gone by. Her subjects are often in the period dress of the Belle Epoque and the atmosphere in each painting is warm, nostalgic, and extremely positive.

In commemoration of the 1999 Special Olympics, Fabienne created three oil paintings on canvas, representing the three points of the Triangle that is played host to the games. The Duke Chapel, the UNC Bell Tower, and The Governor’s Mansion in Raleigh each formed the basis of a painting celebrating sports, community, and diversity.

Fabienne Delacroix has been involved in numerous charitable events since coming to the attention of the Art World. New York Knicks star John Starks has had her create commemorative art two years in a row for his celebrity benefit and golf classic to raise money for inner-city youth. She has also donated her talents to Boathouse Rock, a benefit to raise money for Aids research and education. 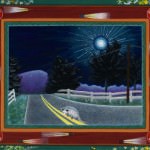