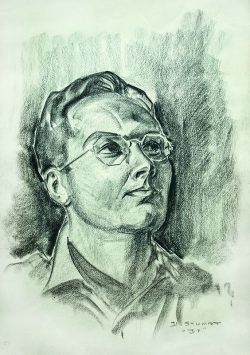 Duncan Stuart was born in Des Moines, Iowa, May 17th, 1919.  He attended the University of Oklahoma, The Chouinard Art Institute in Los Angeles and Yale University. Stuart started as a designer of stage scenery and equipment.  He was the technical director for Farragut Playhouse at Rye Beach, New Hampshire and Spotlight Productions in New Haven.  Stuart served in WWII as a cartographer and after a six month trip to Japan and Korea, where he did work for the U.S. Air Force, he accepted a position in the Art School at the University of Oklahoma.

Stuart was both an artist and a mathematician.  His paintings have been exhibited at the Metropolitan Museum of Art (1950), The Whitney Museum (1951-54), The Chicago Art Institute (1947), were part of a national traveling exhibit from the Smithsonian Institute. The NC Museum of art also has three of his works in their permanent collection.

“Stuart, and his pupils too, exploit color to the limit.  His painting combines the intellectual and sensuous approaches in a dynamic manner which makes Duncan Stuart one of the most exciting starts on the national art horizon.” – John Richard Craft of the Columbia Museum of Art.

His interest in mathematics and geometry lead to his collaboration with Buckminster Fuller to develop geometry that supported the geodesic dome.

Sources:
“Transformation of Polyhedra: an Experiment in Animated Film Making”, by Duncan Stuart. Journal of the American Institute of Architects v. 40 (Dec 1963) p. 99-101 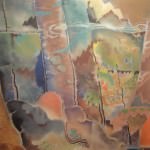