Born in Ginnejen, The Netherlands in 1936, Ben Berns moved to North Carolina to teach at UNC Greensboro in the mid-60s. Awarded a Guggenheim Fellowship in 1971, Berns has exhibited in New York, Denmark, and The Netherlands. His work appears in books and reviews in international periodicals.

He passed away in February of 2007 after a battle with lung cancer. 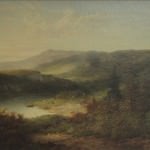