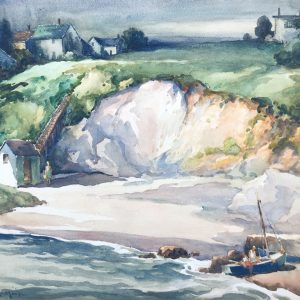 Harry De Maine was born in Liverpool, England in 1880. He spent time in Bolton Abbey, Yorkshire as a small boy. De Maine took his first formal art instruction at the Liverpool City Art School in 1903 while still working for a dry goods store. In 1908 Harry De Maine then went on to study in London and at the Julian Academy in Paris. He exhibited at the Paris Salons from 1908-1913.

Starting in 1914 (WWI) he joined the American Field Service, a volunteer ambulance service, along with some American artists, before and after serving in the British Army.

After the armistice in 1919 Harry De Maine moved to the United States. He first lived in Boston and primarily New York City, but he received the inspiration for most of his work from long summers spent in the environs of Gloucester, Massachusetts. He exhibited widely, but primarily in New York and New England. In 1926 he re-met Lucy MacDonald whom he had known with the Field Service in Paris; they married in 1928.

Harry De Maine was a member of New York’s Salmagundi Club, Allied Artists of America, the Audubon Artists and the National Academy of Design, to which he was elected an Associate member in March, 1951. He served as Secretary of the merged New York Water Color Club and the American Watercolor Society for a combined period of ten years; he served three years as Exhibition Chairman.  In the Gloucester area he was associated with the North Shore Art Association and the Rockport Art Association.

While watercolor was his favorite medium, Harry De Maine received prizes in both watercolor and oil. A Washington Post review once said “ he transferred to America…the lyrical quality of the English landscape.”

To enjoy other artwork by Harry De Maine, including oils, Click Here