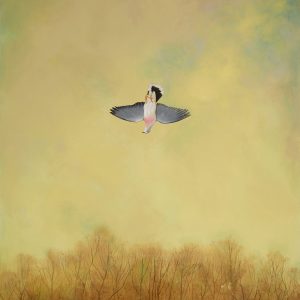 When Michael was a boy of five or maybe six, he was in the woods behind his house when he saw a mourning dove fall suddenly from the sky and hit the ground hard. Michael got close enough to see its heart pounding and he remembers his own heart was beating just as fast. Michael could see the pale rose color of its breast and the gray and cream colors of its wings. He stood as still as so he could watch and wait. The light faded and the woods went silent. The wind died. It got dark and yet the bird didn’t move. Finally, he reached down to pick it up and it exploded in a thunder of wings and vanished into the night sky. That memory, the moment that bird left me standing alone in those dark woods, has stayed with him all his life – more than stayed with him – it has haunted him and has many times over the years entered my dreams.

Most of these paintings show a trinity of bird, sky, and earth or sea, but in some the bird is falling through a vast emptiness of sky and you can only sense the presence of earth or sea somewhere far below. And then, finally in some of the paintings, the skies are empty. Michael see these paintings not as apocalyptic images of doom, but as markers of memory and mourning for each individual bird that has been lost. And it is his hope we can do something now to save those that remain.

Michael Francis Reagan’s paintings have been exhibited in museums, galleries, and universities, including the North Carolina Museum of Art in Raleigh, the Mint Museum in Charlotte, the Brody Gallery in Washington, DC, and others. His work has appeared in National Geographic, the Smithsonian, Audubon, The New Yorker, and others. His paintings are in numerous collections including the La Jolla Map & Atlas Museum and the National Archives, the National Park Service, the National Zoo, Florida Wildlife Initiative, Christie’s International, and the Jane Katcher Collection of Americana.